Artsakh After the Ceasefire

Overnight, seemingly all of Armenia mobilized to support the war effort. Thousands volunteered to fight, including many Armenians living abroad. Those who couldn’t fight gathered supplies, sewed blankets, and helped transport people and supplies.

“The people kept our spirits up,” said Gayl*, an Armenian soldier from Yerevan who fought in Artsakh. “In every package we received, there were letters from children and old folks, supporting us and asking us questions. I saved several of them. But I can’t read them any more, because I feel like I’ve let these people down.”

“It was very predictable that one day, this hatred that accumulated in Azerbaijan, and also, the huge number of powerful weapons accumulated by Azerbaijan, would be a reason for humanitarian catastrophe in the region, but nobody stopped it,” said Artak Beglaryan, Artsakh’s Human Rights Ombudsman. “And some countries actively sold weapons, including banned weapons, to Azerbaijan. And they are still selling.”

I asked Beglaryan if he was referring to Israel, which supplies an estimated 60% of Azerbaijan’s weaponry. “It makes no sense that a nation which saw genocide sells weaponry to a country which is inclined to make a new genocide against a nation,” he said. “Israeli leadership clearly understands that Azerbaijan is a threat not only to Armenians, but to the whole region, and Israel and other countries that sold weapons to Azerbaijan bear responsibility for the war crimes Azerbaijan committed with them.”

During the course of the conflict, Azerbaijani bombardment on Artsakh displaced more than 60% of residents from their homes. The majority of those who stayed in the area moved into basements for the duration of the war.

I spent four days in Artsakh in mid-October, staying in a hotel in a wholly civilian area in Stepanakert. My first night there was, according to many locals, the calmest the city had been since the start of the war.

It wasn’t to last. The next night, at around 10pm, air sirens sounded and explosions quickly followed. The hotel’s inhabitants rushed to the basement to shelter. Several families from Artsakh had already set up a makeshift living area, having gotten used to the constant threat of bombing. When the sirens sounded again at around 2:30am, a priest appeared in the basement. He lit a candle and led a prayer for protection.

Most in the basement dozed until around 5am, when the sirens sounded again. Minutes later, we heard a number of consecutive, audibly closer explosions. I went back to my room at around 7am. The siren didn’t wake me when it went off again around 8am, but the nearby shelling shortly thereafter did.

It is devastating to realize that the people of Artsakh endured some iteration of this night almost  every night for a month and a half.

“My people were ready to fight to the end,” Gayl said. “But was it worth it? Everyone hoped the world would pay attention to the war crimes Azerbaijan and Turkey committed against us, but no one did.” When the war began, Gayl had just returned to Yerevan from a vacation abroad. On September 27th, when he received a call to report for immediate duty, he was technically still on vacation.

“I’ve been serving since I was 18 years old. I’m 23 now,” he said. “This is my second war. In the first, in 2016, I was 19.” In April 2016, Azerbaijan attacked Artsakh, claiming it necessary was to prevent Armenian shelling on Azerbaijan. It is worth noting that there was no proof such shelling occurred. The fighting lasted four days before Russia brokered a ceasefire. Between the two sides, hundreds of servicemen were killed.

“There were small-scale attacks in 2016, and small groups, of soldiers” Gayl recalls. “I lost one friend during that war. But in this war, I’ve lost so many. I’ve lost five of my closest friends, people I would talk to every day. Right away, it was clear that this war was much different than the one in 2016. There was nonstop aerial bombardment, and many tanks and armored personnel carriers. Turkey gave Azerbaijan drones, which became a huge problem for us. And they had militants from Syria, too.”

Days before the war began, Turkey began sending militants from the Syrian National Army (SNA), the umbrella organization of all Syrian opposition factions backed by Turkey, to support Azerbaijan in the fight. Turkey and Azerbaijan deny that mercenaries were deployed, despite France, Russia, the US, and the UN revealing that they had clear evidence to the contrary.

An Armenian diplomat speaking on the condition of anonymity said there were indications Turkey and Azerbaijan would be launching a new attack. “In certain European circles, we heard that Turkey and Azerbaijan might start the war during or after their scheduled joint military exercises [this past August],” he said. “That didn’t happen, but then, we heard about mercenaries being recruited later in the summer. So it’s clear this aggression has been planned for a long while.”

I interviewed several sources from the Hamza Division faction of the SNA who were deployed to Azerbaijan and participated in combat during the first weeks of the conflict. All described feeling as though they’d been deceived by Turkey and their Syrian commanders about what they’d be doing. Most were told they would be sent as guards, and that they wouldn’t have to fight.

One Hamza Division militant said the combat was much more intense and dangerous than anything they’d experienced in almost a decade of fighting in Syria and several months of combat in Libya, where Turkey has also sent thousands of SNA members. “Everything before this felt like militias fighting,” he said. “In Azerbaijan, it was countries fighting. And we didn’t know what to do.”

In early October, around 700 SNA militants from the Hamza Division and Sultan Murad factions were returned to Syria after refusing to participate in combat in Azerbaijan. “There was one day that made us decide to stop fighting,” the Hamza Division militant said. “There were 45 of us on some hills. We were by ourselves in a group; just Syrians. The snipers started. We didn’t see them, but we would hear a shot, and one of our men would fall. We’d hear a shot, and a man would fall. We started to run away. I survived, but most of our group was killed.”

The Hamza Division militant’s account bears a striking similarity to an event Gayl remembers. “It was the first week of October. We came upon a group of about 50 men west of Gadrut. They weren’t wearing any body armor. No bulletproof vests or anything, which was strange, because every group of soldiers we came across before and after this were wearing protection. They had

“The snipers started and killed four of them immediately. Then, my group killed about 20 of them. The rest managed to flee. They looked lost, and they were by themselves, but they walked in a crowd. It was obvious they didn’t know the terrain,” Gayl said.

When asked during the war if the heavy losses would deter other Syrians from joining the fight at Turkey’s behest, the Hamza Division militant laughed. “No, it won’t matter. If Turkey wants, they can send another 1,000 men from Syria right now,” he said. SNA sources say that most of the Syrian mercenaries deployed to Azerbaijan by Turkey are still there, and that there is talk of sending more.

As the conflict wore on, morale among the Armenian soldiers became a serious issue. “At the beginning, everyone was ready to sacrifice everything to fight,” Gayl said. “But over time, people became more and more afraid. We did the best we could, but Azerbaijan still had so many more people than we did, and so many more weapons. We were fighting Turkish drones with no air defenses. It lasted a long time, and on the front lines, many of our men got sick with dysentery, but we couldn’t replace them.”

“We needed more skilled people than we had,” Gayl continued. “The volunteers did help, and many were ready to stay and fight, but some were overwhelmed by the realities of this war and couldn’t handle it. There was one day that was especially difficult for me, in the final days of the war.

“I was told to bring a group of 60 volunteers on a mission. But when we arrived at our destination, many of them became very afraid. They were saying that everyone would die, and it would be my fault. Everyone wanted to leave, but the lives of many soldiers depended on us. I worked hard to convince them to stay, telling them how important our mission was.

“It was hell for me. I could barely hide my tears. I was able to convince some people to stay, but the rest were ready to use force against me to escape. In the end, instead of 60 people, only 17 stayed with me. But still, in spite of everything, I thought we would win the war,” Gayl said.

On November 10, days after losing the key strategic city of Shushi to Azerbaijan, Armenian Prime Minister Nikol Pashinyan announced that he’d signed a trilateral peace agreement with Azerbaijan and Russia, ceding portions of Artsakh to Azerbaijan. 2,000 Russian peacekeepers were deployed to oversee the handover and, according to the agreement, will remain in the territory for at least five years. According to Artsakh President Arayik Harutyunyan, the ceasefire deal was unavoidable, and refusing it would’ve resulted in the loss of all of Artsakh to Azerbaijan.

“The day the war ended was already an exhausting day for my unit,” Gayl said. “We’d just returned from the frontline, and we came under fire. After that, we had nowhere to sleep. We didn’t want to retreat far, because we figured we could have been useful at night. We lit a fire and appointed watches by shifts. My shift ended at 2am, and I went to sleep. At 4am, my friends woke me and said the war was over, and that we were surrendering territories.

I didn’t believe them. I couldn’t believe them. I sat for hours, just waiting for the sound of gunfire, or artillery, just hoping for it, and it didn’t come. It felt like a tragedy. Everyone was in a panic. Everyone wanted someone to blame. No one wanted to accept that we lost, including me. Shortly after, we were transferred out of Artsakh, to a post near the border.”

“Turkey and Azerbaijan both realized that without Turkey’s support, Azerbaijan would have lost this war,” said Suren Sarumyan, Spokesman of the Artsakh Defense Army. “This part of the Caucasus has always been of interest to Turkey. And Erdogan sees himself as a descendent of the Ottoman Empire. He wants to expand. He wants to make his Ottoman dreams real.”

Aspects of the ceasefire deal remain murky. The Turkish government insists that Turkish peacekeeping forces must be deployed within Karabakh. The Russian government says Turkish forces won’t be permitted to take up posts in Karabakh, but that negotiations are ongoing.

Still, since the implementation the ceasefire began, and Azerbaijani forces moved into parts of Karabakh, evidence of vandalism and civilian abuse has surfaced continuously. Today, Artsakh’s Human Rights Ombudsman Artak Beglaryan shared a video of an 80 year-old Armenian man, Jonik Tevosyan, being kicked and dragged by Azerbaijani troops in Shushi. The video was discovered after Azerbaijani soldiers posted it on social media. “I don’t know of any single case in which an Armenian was treated humanely [by Azerbaijan] since September 27th,” Beglaryan wrote.

“I think Turkey used Azerbaijan,” Gayl said. “They are not winners, either. But my country lost, so I lost, and no matter how it happened, it’s a failure for all of us. When the war ended, I thought it was better to die. But I realize now that while I’m still alive, there is hope.” 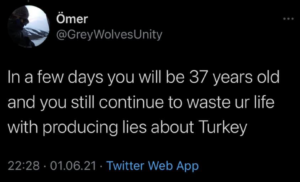