“I Don’t Believe the Lie of the ‘Armenian Genocide.'”

Ozan*, a 19 year-old university student in Istanbul, has a popular Instagram account boasting nearly 100,000 followers. He sends me a direct message on Intagram every week or two. Usually, he replies to news I’ve reported with disbelief.

“I think you’re biased, and I think you support terrorism, and that saddens me,” Ozan said. “But sometimes, you tell us the events that we cannot see in the news in an uncensored or impartial way, so I like and follow you,” he said. “For example, the aggressive actions of Azerbaijani soldiers towards civilian settlements in Karabakh. I saw these from you for the first time.”

Following a November 2020 ceasefire agreement in Karabakh, which ended the fighting between Armenian and Azerbaijani forces, Azerbaijani soldiers have routinely posted videos of themselves torturing Armenian captives and looting and destroying abandoned Armenian properties.

In another video posted from Karabakh in late December, 2020, an Azerbaijani soldier is seen in a home, flipping through a photo album left behind by an Armenian family. He pauses at every photo containing a woman he considers attractive and gives the camera a thumbs-up. When the soldier posted the video to his Instagram account, he captioned it, “Armenian whores.”

“I didn’t want to believe these videos when I saw them,” Ozan said. “But then, I started researching myself. I looked on Telegram. I saw many other videos much worse than the ones you’ve posted. They are proud of their barbarism. I saw soldiers cut the throat of an old man in one of them.”

The curriculum and text books used in public schools in Turkey are vetted by the Turkish government, ensuring that the material taught to students in Turkey echoes the agenda of the ruling AKP political party. The Turkish government categorically denies the Armenian genocide. About the events of 1915, Turkey’s government-approved 12th grade history book says, roughly:

“In 1915, Russia, the UK, and France wanted to divide the Ottoman Empire between themselves, so they incited the Armenians to rebel against the Turks. While Turkey was fighting against Russia on the Caucasus front, Armenian gangs raided Turkish villages and forced Turkish people to migrate to inner Anatolia.

Armenian gangs committed massacres in many parts of Anatolia, like Bitlis, Van, Erzurum, and Diyarbakir. Turks who survived these massacres tried to flee to Anatolia, but most of them were attacked on the roads by Armenian gangs. Ottoman armies who were fighting Russia in the Caucasus and the British and the French in the Gallipoli now had to fight against Armenian gangs.

Russia took advantage of this situation and advanced through Eastern Anatolia. The Ottoman government had to respond to this, and arrested the members of the Hinchak and Tashnak organizations. Every year, on the 24th of April, Armenians memorialize those arrests and try to portray them as massacres.”

“This wasn’t the exact book we used in my history class, but the words are almost exactly the same,” said Ozan, after reviewing the textbook pages. “I believe this. Even Armenians living in Istanbul say that it wasn’t a genocide,” he said. He thought for a moment, then continued. “But I don’t know if they’re saying that because they’re afraid of negative reactions.”

“Are you aware of the near-global consensus that the Armenian genocide did happen?” I asked.

“Look,” Ozan said. “The Armenians living here in Turkey were not sent down from heaven by God. If there was a genocide, how do they exist? I’d have to see strong evidence to believe otherwise.”

Volkan*, a 22 year-old university student from Mersin, sent a message several months ago to tell me that though he appreciates and reads my work, he’s afraid to actually follow any of my social media accounts from his. “I’m afraid that if somebody doesn’t like my opinions, and they see I am following you or liking your posts, they will accuse me of being a PKK or FETÖ supporter,” he said. “There are so many ridiculous ways to get arrested in Turkey these days.”

Volkan says that while he was attending a public high school in Mersin, he began to question the Turkish government’s narrative of the Armenian genocide. “I was a history nerd, so I was aware of it,” he said. “And I used to listen to System of a Down a lot, and they’re Armenian and talk about the genocide.

“But I didn’t want to believe it was real. I thought it was something like a misunderstanding, or a conspiracy against the Turks. I thought Armenians were overreacting to what was an exile, and that this exile was justified because Armenian gangs were sabotaging the Turkish army in the Caucasus. This is what we were told. But by the time I was in my last year of high school, I knew the Armenian genocide was real and the Turkish government was lying about it.”

Volkan says he didn’t know any Armenians in his classes, but has Armenian friends in other parts of the country. “One of my friends was bullied by a group of Grey Wolves [Turkish nationalists] at her school in Istanbul,” he said. “They overheard her having a conversation with someone in which she mentioned being Armenian. After class, the Grey Wolves pushed her and swore at her.”

Seda*, an Armenian woman living in Turkey, went to private school in Istanbul. “One history teacher said, ‘How can Armenians even exist in Istanbul if there was a genocide?’ And I took a stand, and I told her 1.5 million were murdered,” she said. “Another of my teachers said it was an exile, and a huge human tragedy, but he refused to use the word ‘genocide.’ I can’t imagine how bad it would have been in a public high school in Turkey.”

Seda says she has experienced racism for being Armenian many times in Turkey. “I live in a vacation area during the summer, and there are a lot of Armenians in this area. There’s a bakery owned by a Turkish man there, and once, he mistook an Assyrian customer for being Turkish, and told the Assyrian man, ‘Look at all these nice houses. They’re all owned by Armenians. We should really have killed them all.’”

Seda says living in Turkey during the Karabakh war was especially hard. “It was a horrible, and it’s still horrible,” she said. “And when they opened that ‘Trophy Park,’ earlier this month, it felt like we were in a horror movie.”

“Military Trophy Park” is an Azerbaijani government-run exhibition of military vehicles and equipment seized from Armenians during the last Karabakh war. There are recreations of trenches and military offices featuring caricature-like statues of Armenian soldiers in humiliating positions. The park has been wildly popular, with long lines forming for entry.

One mother posted several videos of her two young boys enjoying the park. They visited the trenches, marvelling at the use of real barbed wire, before they jumped on a replica of a landmine. In her caption, the mother mentioned that one of her boys was missing for a brief period, and just as she’d started to worry, “…I suddenly saw Amir running towards us in delight, he’d seen a machine gun and [pretended to] shoot all the figures of the Armenians in the trench.”

“That park just instills hatred in the people, especially in the children,” said Samet*, a 27 year-old government employee in Baku. “It’s wrong. And the hate we are taught is not limited to Armenians. I grew up learning in school that Turkey rightfully owns all of Cyprus, and that Greece is bad. Greeks and Armenians are portrayed as equally bad. And they tie religion into these feelings. They tell us they’re infidels because they aren’t Muslims.

“I grew up believing these things with all my heart,” Samet continued. “And it wasn’t until I was around 18 years old and started doing my own research that I realized so much of what I learned was wrong.”

Samet says his opinions make him an outlier in Azerbaijani society. “Less than 5% of people here think the way I do,” he said. “I can only share how I really feel with my close friends and the people I trust. I’d be declared a traitor and probably arrested if I shared my opinions with everyone. That is, if people didn’t kill me first. And yes, what happened to the Armenians was a genocide. I know that.”

On April 24, US president Joe Biden formally acknowledged that the Armenian genocide took place, enraging the Turkish and Azerbaijani governments. “I see so many bad posts by people here in Azerbaijan,” said Samet. “They’re saying things like, ‘Yes, we did it, and it was good.’

Ozan says he’s seen a variety of responses to the US’ declaration. “It doesn’t matter to me. I still don’t believe the lie of the ‘Armenian genocide,’” he said. “But most people are angry. Some just deny that anything happened. Some call for an investigation. And some say ‘Yes, it happened. And the Armenians deserved it.’” 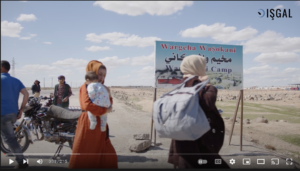 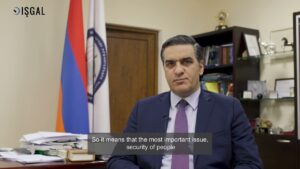